So here’s something weird. A little while back I was typing on my laptop in a coffee shop near my place (yes yes, I know, writing in a coffee shop: I’m that big of a cliché), when this woman came up to me and, with a curiously endearing shyness, said “Hey you.”

I looked up and gave her the once over. Sheepish smile, inviting green eyes, thumbs hooked casually into the back pockets of her skinny black jeans. I had absolutely no idea who she was. 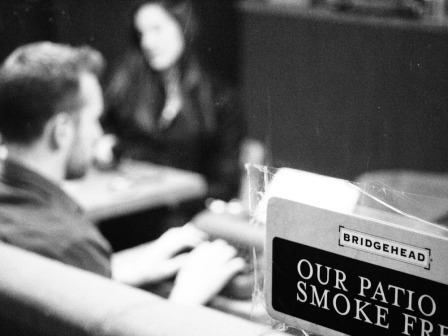 But hey, no big deal, I thought. I hang out at that particular coffee shop a lot and sometimes strangers recognize me. So I smiled with cautious enthusiasm, looked into her eyes, and said, “Hey yourself.”

Her gaze darted away from mine to something on the floor and then back.

“Right. Hey. Sorry to interrupt, but, um…” She paused then and during the moment that hung between us my smile became a smirk. In my experience, people are never actually sorry to interrupt you, but saying they are gives them a convenient segue or tacit permission to bring up whatever it was they felt it necessary to interrupt you for in the first place. And that was okay with me. I had hit a rough patch in the story I was scribbling and didn’t mind a little distraction. Plus, she was cute. I leaned back, cocked my head, and raised my eyebrows as though to say, “Yes, but…?” She cleared her throat.

“Well, it’s just that, I couldn’t help but notice you, and, um, well…” She paused again, searching for words I guess, and a slight pink flush began to spread across her cheeks. Aww, I thought. This girl is hitting on me. That’s cool. Always a nice surprise. Who doesn’t love that? But then she winced like something was really bothering her and all at once I sensed she was about to admit something I didn’t want to hear. She opened her mouth, closed it, tried again. “Well, okay. It’s just that I was looking at you and I couldn’t help but notice, and I really hope you don’t mind me saying this, but you have the loneliest eyes I have ever seen. Are you okay?”

I sat there not saying anything for a few seconds—because really, what the hell does one say to something like that—as all sorts of questions bounced around my brain. Things like: Huh? What? Loneliest? What the…? I mean, the hell? And what does that even mean, “Am I okay?” I think I’m okay. I mean, I feel okay. Am I not okay? Who the fuck is this girl? And what the HELL?!

So I kept smiling like an idiot as I tried to make a joke.

“Oh, yeah, I’m okay. Just tired, I guess. And you know, hung over.” I heard the words come out and thought, Wow. Wasn’t there supposed to be a joke in there somewhere? Sure, I was tired, but I wasn’t hung over (it was 9 p.m. on a Tuesday for chrissakes), and nothing I had just said was the least bit funny. But still, and more importantly, what the HELL was going on? Because I had no idea else to do, I opted to keep talking. “Anyway, that’s very sweet of you to ask and everything, but I’m okay and… wait, hang on, my eyes are lonely?”

She smiled at me—this sweet, all-knowing smile—and nodded. “It’s okay,” she said and placed a hand on my arm. It felt warm and vaguely protective. She kept her hand on me for a beat longer than seemed necessary and said, with surprising feeling, “I’m just going to give you a hug now, okay?”

I must have said yes. And really, why not? Who doesn’t like hugs? Besides, I figured that if I was sitting there in the grips of some unrevealed existential loneliness that a stranger sitting across a crowded room could pick up, then I damn well needed that hug. So she hugged me, patted my shoulder, and walked out of the coffee shop like nothing had happened. Like it was just another regular Tuesday evening spent hugging a stranger.

I sat back down and turned to the guy next to me, who I had chatted with a few times and almost knew. We exchanged bemused “what the fuck was that about” shrugs and tried to laugh. “Lonely eyes?” I said.

“Shit man, hell if I know.” He was staring at the door she’d just disappeared through as though he expected her to return at any moment. He was obviously just as baffled as I was.

“And isn’t that a like a shitty Glass Tiger song?” As soon as I said that I knew I was wrong, that the song is called “Hungry Eyes” not “Lonely Eyes,” but whatever. I felt entitled to a little muddled thinking just then.

I turned back to my laptop and started to reread the story I’d been working on, but I only got a few sentences in before it became obvious to me that I was done for the evening. Whatever magic I’d been chasing had left the room with my anonymous hugger, as though in her efforts to give me something she had somehow taken something from me instead. Still, I didn’t feel lonely or alone or lost or emptied out or however it was she thought I looked. Maybe just a little tired. And, oddly enough, perhaps a little hung over. I sighed too loudly and stared at the screen, as though the paltriness of the words it contained were somebody else’s fault. Then it hit me. My fingers floated above the keyboard, eager to pounce, ready for their familiar work. Maybe I wasn’t quite finished for the evening after all. I inhaled deeply, let it out, and began to type.

“So here’s something weird…”

Like Loading...
This entry was posted in Reports and tagged Coffee, Dating, random, Writing. Bookmark the permalink.