The Day I Met Charlie Sheen

Back in high school I dated a girl whose father didn’t like me very much. After a while he even stopped using my name and started calling me, with a sneering disdain he didn’t bother to hide, “Mister Jovial.” I had earned this dubious moniker through a series of unwitting mistakes, including a rare moment of muted enthusiasm when I came to fetch his daughter one evening for a date. Apparently I had failed to express appropriate glee over something that had excited him—I can’t remember what. But from that moment on the name, and his dislike of me, stuck. 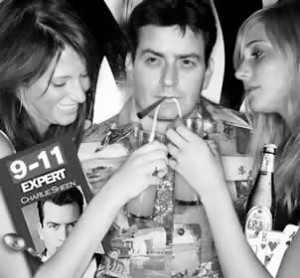 I was therefore shocked when he asked me to drive with him to Toronto. I had been Mister Jovial for maybe six months by then and his daughter and I were still together even though she was spending the summer in Mississauga with her mother, his ex-wife. He was going to Toronto on business and planned to make the most of the trip by spending a few days with his daughter, and, in a moment of inexplicable kindness, invited me to tag along. Or hell, maybe he just needed a second driver. In any case, of course I agree.

He said there was just one catch.

“When we get to Toronto I’ve got some stuff to do downtown, so you’ll be on your own for a few hours. Then I’ll pick you up and we’ll head to Mississauga. Think you can manage?”

Wait, that was the catch? I’d never been to Toronto. For me, the name “Toronto” was pronounced the same as “Paris” or “London” or “New York.” (That’s what happens when you grow up in a small New Brunswick town: any large city takes on mythic proportions.) Of course I could manage for a few hours. When did we leave?

The drive took about 14 hours. Although it wasn’t the easiest 14 hours of my life—punctuated as it was by cumbersome silences, predictably intrusive questions I didn’t want to answer, and casual, pseudo-fatherly advice we both knew I wouldn’t heed—it was far less awkward than I had feared. There was even a moment there when he seemed, almost, to be trying to get to know me, which probably took some doing. Let’s not forget that, in addition to my ill-timed lapses of enthusiasm, I was also a disaffected teenager who listened to too much Nirvana and still believed that my adolescent air of bitterness and mystery made me pretty fucking cool. But he talked to me in a way that was nearly amiable, and I did my best to appear interested in his strange and rambling stories. He even bought me a takeout dinner and several cups of Tim’s as we took turns driving through the night. When we arrived in Toronto, he dropped me off downtown and sketched out a meeting place and time. I mumbled something appeasing, hopped out, stretched and yawned so widely that it almost hurt, and took my first greedy swallows of thick, hot, stifled Toronto air. It tasted like shit. I didn’t care. This was an important moment. My pulse quickened at the thought of all the endlessly promising possibilities Toronto contained.

I had given myself only two rules to follow. I wasn’t stupid. I knew that I was 18 and that this was my first time in the Big Smoke, so I vowed I wouldn’t wander around looking like some slack-jawed small-town yokel way out of his league. I was going to blend in. And I was certainly not going to climb the CN tower. That was for vacationers, not bitter and mysterious teenagers who took themselves far too seriously. For all the good my rules did. I don’t think I was on the streets ten minutes before I slid seamlessly into the role of first-time tourist. Christ, there was just too much to gawk at. Endless throngs of people walking like they had somewhere to go (Had I ever seen such purpose on the streets of my hometown? Had anyone there ever walked at a speed above “ambling?”), glass office towers that stood taller than all of my city’s downtown buildings stacked on top of each other, a mall that seemed to go on a couple hundred blocks. Everywhere I looked I was confronted with the hugeness of this concrete mess. I got a white hot chocolate at Second Cup, fell into a crowd, and started to seriously roam.

I was standing on a corner a few blocks from the Sky Dome waiting for lights to change when a burly man in a black security uniform stuck an impenetrable arm in front of me. His T-shirt—which must have been an extra, extra, extra large—still looked about two sizes too small for his chest.

“Hold up guys,” he said, in a brisk voice that left even less room for argument than his massive arm. He seemed to be talking both to me and to everyone around me at once. I shrugged and said sure and then stood there like the whole thing had been my idea, like standing on a street corner in a city I was aching to explore on a blistering sunny morning was exactly what I had been planning to do anyway. It was then I noticed a crowd seemed to be forming, spilling across the sidewalk on either side of me and threatening to push out onto the street. That struck me as odd, but I didn’t let on. I mean, hey: I was blending in.

Nothing much happened for the next several seconds so I went back to gawking and sipping my hot chocolate—the whipped cream had melted a little and infused the whole thing with a dizzying deliciousness. I was still sipping and studying the garish neon façade of the Hard Rock Cafe when a white limousine came to an abrupt halt in front of me. Judging from the way the driver blared his horn, this wasn’t his intended stopping point so much as an emergency maneuver designed to help him get through his day without running over pedestrians. I figured this kind of thing must happen a lot in Toronto, so I didn’t think much of it until the window in the back rolled down. A thick, vaguely familiar voice called out.

I looked around to see who he was talking to, surmised it must be me. I stooped and peered into the back of the car and saw two men in sunglasses beaming practiced smiles at me. Lots of smooth creases on their cheeks. Big white teeth.

This answer seemed to confuse them. They glanced at each other and then leaned closer to the window. I slid my sunglasses off my face and took a better look and thought: Oh. That’s Wesley Snipes and Charlie Sheen. This thought was quickly followed by another. Huh. Worst. Actors. Ever.

Charlie—mind if I call him Charlie?—collapsed forward and laughed like I was the most hilarious man he’d ever encountered, which maybe I was but I hadn’t meant to be. Wesley turned up the wattage on his smile until I almost couldn’t bear to look at him.

I had absolutely nothing to say. People talk of being star-struck, of being so debilitatingly excited when they meet a celebrity that even though they have all these things they want to say their mouth gums up and the best they can do is mumble and smile. This wasn’t like that. This was a moment of staggeringly profound disinterest: it was Mister Jovial at his absolute unenthusiastic peak. Truth was, I couldn’t give a shit about Wesley Snipes and Charlie Sheen. The only thing I could think to say was, “So, yeah. Huh. What are you guys doing here?”

More confusion. Charlie still had his face in his lap and he was laughing so hard his body was convulsing. Wesley pointed to the Hard Rock Café. “Um, you know, we’re doing the thing,” he said.

I nodded. Ah. The Thing. Of course. Why else would you be here?

“That’s cool,” I said. I put my hands in my pockets and slowly looked away. I didn’t look back at the car, but I got the feeling Wesley was doing the backseat limousine equivalent of the same.

And then finally, mercifully, the moment was broken. All at once everyone around me realized who was in the limo in front of them—at least a few even seemed to know all about the fabled Thing—and I was jerked back from the curb as eager hands jutted toward the window. I turned and walked back through the crowd thinking there must be another way around the intersection. And something else to see.

I tossed my paper cup into a bin and decided I was going to climb the CN Tower after all. What the hell, I had time, and I figured it would give me at least one story to tell my girlfriend. (Turns out all I found out was that the tower is ridiculously tall, and I suspect she knew that already.) When her father arrived to pick me up, he seemed tense and distracted and tired, so we sat in a kind of stunned silence as we drove to Mississauga. I stared out the window as the city sped past and I pondered that sprawling mess of concrete, those thousands of lives I could almost see, and found myself wondering about limousines and celebrities and the peculiarities of my own small life. And then I muttered aloud, without thinking about how it might affect my reputation for joviality, “Man, this is a weird fucking city.”

He sighed and cast a sneering glance in my direction, but didn’t say anything. The look said enough.

2 Responses to The Day I Met Charlie Sheen